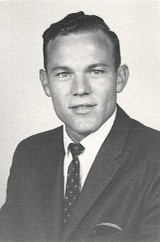 Edwin was born on June 25, 1934 in Mountain City, Tennessee. He was the first-born child of Charles and Bessie (Phillipi) Rust, followed by a brother, Richard and a sister, Janet.

He grew up in Garden City, Michigan and was a member of the first graduating class of the very first high school built in Garden City. He attended Adrian College in nearby Adrian, Michigan, graduating in 1956. He majored in English and Speech. Later he obtained a master’s degree from Eastern Michigan University in Ypsilanti, Michigan. After relocating to Rochester, Minnesota in the mid 1960’s, he earned an education specialist degree.

Baseball occupied a great deal of Ed’s life from childhood on. He played baseball in college, setting records that took many years to be broken. In later years he played softball in several leagues.

Ed met his future wife, Yvonne Brumbaugh while attending Adrian College. They married in 1955 and enjoyed sixty-four years together until Yvonne’s death in 2019.

Ed taught at almost all the middle schools in town. He was with the first group of teachers that opened Willow Creek and taught at Central and John Adams. He retired in 1996 after forty years of teaching.

Ed and Yvonne were active in square dancing for many years before falling in love with round dancing. They formed their own club, Round-Ey-Vous, which was active for approximately thirty years.

In addition to his wife, Edwin was preceded in death by a daughter, Susan Rust, a son Lawrence Rust, and his sister, Janet Larson. He is survived by two daughters, Kathryn (Andrew) Booker, and Patricia (Michael) Sindt, and by a son, Timothy Rust. He is also survived by two granddaughters; Lorna and Sarah Booker, three grandsons; Andrew, Nicholas (Megan Smead), and Nathaniel McMonigle, and his brother Richard Rust. He leaves behind several nieces and nephews.

The family wishes to thank St. Croix hospice for their compassionate care at the end of Edwin’s life.

There will be a private family service at a later date.

Anyone who wishes to, may donate to Peace United Church of Christ, or an animal shelter of their choosing.

Rochester Cremation Services is assisting the family with arrangements. Memories and condolences of Ed may be shared at rochestercremationservicesmn.com

One thought on “Edwin Rust”