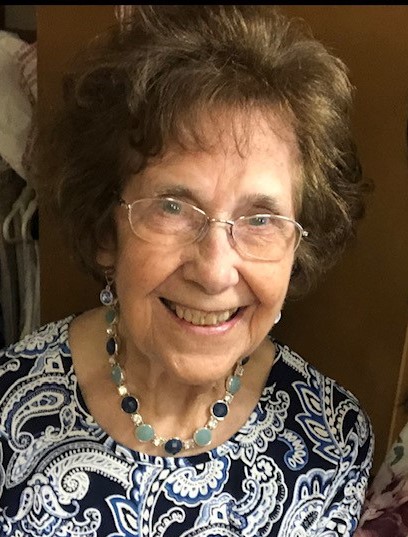 Donna L. Stock, age 83 of Waterloo, Iowa passed away peacefully on Thursday, October 8th, with her daughters Jolene and Corine, along with her son-in-law
John, by her side.  Donna has gone to heaven to be reunited with her daughter Tracy and son-in-laws Ed Garris and Craig Ramaker.

Donna was born on January 26, 1937, along with her twin Dotta, in Hampton, IA to Homer and Ellen (Kuhn) Stilson.

Donna graduated from Dumont High School in 1955.  In December, 1956 Donna married Dennis Stock and they had three daughters, but they later divorced. She then moved to Waterloo and worked several jobs in the area before earning her Bachelor of Arts Degree from The University of Northern Iowa, in 1974.  Donna was then employed at John Deere for 24 years before retiring in 1999.

Donna loved to sew and truly had blessed hands for sewing.  She made her daughter’s wedding gowns, bridesmaid and prom dresses.  Donna also did alterations for countless people in the Waterloo area, even though she had an endless supply of alteration requests to do for her family.  Donna loved to bake as well, and chocolate chip cookies were her favorite to have on the table for family or friends that would stop by.  Donna had a loving and caring heart, a million dollar smile and her laughter brightened any room.

Donna was an active member of the Kimball Avenue United Methodist Church, she belonged to Priscilla Circle and was in charge of the Funeral Committee for many years.  She always kept herself busy through volunteering in the community and especially enjoyed being the snack lady at the San Marnan Kwik Trip.  Donna also filled her retirement years enjoying her grandchildren and great-grandchildren.

She is preceded in death by her daughter, Tracy Garris; son-in-laws, Ed Garris and Craig Ramaker; brother-in-laws, Robert Brandhorst and Roger Curran; and her parents, Homer and Ellen Stilson.

Memories and condolences of Donna are also welcome at rochestercremationservicesmn.com