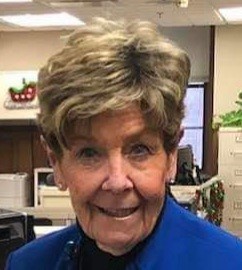 Margot Trowbridge passed away on Tuesday, May 12 at Methodist hospital after battling metastatic breast cancer. She was born December 13, 1944 in Rochester to M.B. and Margaret (Weick) Thompson.

She graduated from Shattuck-St. Mary’s in 1962. She went on to college at University of Wyoming, where she met and married Gene Trowbridge Jr. They later divorced.

Moving back to Mn in 1967, she attended Austin Community College, earning her Associates degree in 1969. In 1974 she married Robert Moore, they later divorced. She earned her Bachelors degree from Concordia College in 1991.

Margot retired from Mayo Clinic, Dept. of Education, in 1999 after 30 years of service, in 2003 she returned to work at Mayo, where she worked until her passing.

Margot was always known to be a classy and sassy lady with a one of a kind laugh.

She is survived by her sons, Trey (Mindy Drenckhahn) of Plainview and Britt (Melissa) of Rochester; grandson, Ryan of Duluth; 8 step grandchildren; 5 step great grandchildren; and her brother, John (Nancy) Thompson of Palm Desert, Ca. She was preceded in death by her parents; and brother, Ben.

There will be a private family committal of her ashes, followed by a Celebration of Life after Covid.