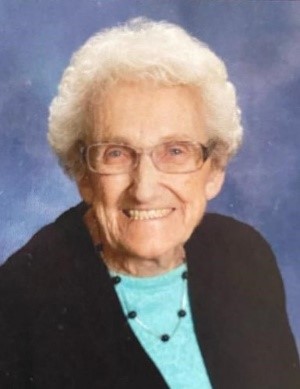 Lillian A. (Lil) Aarsvold, 93, of Zumbrota, died on Friday, March 20, 2020 at Zumbrota Care Center surrounded by her family.

In 1944, she graduated from Kasson High School.  She followed her dream of becoming a teacher and graduated from the Austin Teacher’s Training Department in 1945. She taught several years in Dodge and Olmsted counties, teaching grades one through eight which she thoroughly enjoyed!

In 1946, she married the ‘love of her life,’ Donald Aarsvold, from rural Kasson.  They farmed the Aarsvold home place and enjoyed country living. During this time, they were blessed with four children:  Dennis, Cheryl, Mark and Donna. Lil loved caring for her children, being a home maker and helping her husband on the farm whenever she could.

She was active in her church as a Sunday school teacher, youth leader, choir member and involved in women’s groups, most notably WELCA, Women of the Evangelical Lutheran Church of America.

In 1967, she and Don accepted a call from the American Lutheran Church Mission to serve as house-parents for missionary children in Campinas, Brazil.  During this time she enjoyed being a substitute teacher at the American School where the mission kids attended.  She tried to be the ‘best mom’ that she could for her own children and to many others while serving in Brazil.

She was forever grateful to God for His faithfulness to her and her family.

After returning to the U.S. in 1978, she and Don served as resident counselors at the Lutheran Bible Institute in Anaheim, CA.

They moved back to Kasson, MN, in 1984.  At this time they purchased a home and enjoyed living there until July of 2013, when they moved to the Zumbrota Care Center and Bridges Assisted Living.

She was preceded in death by her husband Don, sister Burnette Skogen, and brothers Harold, Harry Jr., and James Peterson.

A memorial service will be held in honor of Lil’s life at a later date.