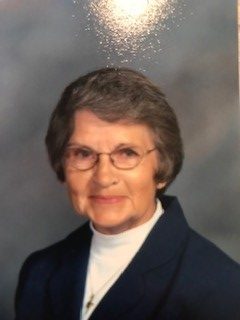 Jesus gathered her up in his arms and delivered her to that great garden in the sky where she can dig in the dirt to her heart’s content and until the rest of us can join her.

She was born in Red Lake Falls, MN on 12/18/1935 and grew up in Plummer, MN.  There she married her first husband Robert Dube and moved to Williston, ND and they had five children.  Later in life she married Bob Larsen and resided in South Bend, IN where she worked for many years as an office manager for Tucker Freight and later for New Energy.  After Bob’s death in 2001, she retired to West Concord, MN to be close to much of her loving family.

She was preceded in death by her parents Swande and Marie Kela, her husband Bob Larsen, her sisters Laverne Kela and Arlene Kiel, and her brother Swande, Jr.  She is survived by sons Chuck (Denise) Dube, Jeff Dube, and Kym (Jane) Dube; daughters Kathy (Larry) Huttar, and Robin (Tom) Kaczmarek; 9 grandchildren, and 8 great-grandchildren.  She is also survived by four nephews, and a host of friends who loved her.

Memorial services will be held at a future date and internment will be at Emardsville Cemetery in Plummer, MN.